here are the best places to visit in Visakhapatnam

Visakhapatnam has its fair piece of history to share. Spread around the city are many examples of the contributions Visakhapatnam has made to the nation’s safety and how it has always been at the front, be it the Second World War or the 1971 India-Pakistan War. For those who love to dive into historical facts and treasures and know about India’s long history, here are five places of historical significance in Visakhapatnam:

INS Kursura (S20):
Standing tall as the only submarine museum in India, INS Kursura has been a symbol of pride, both now and back when it was in service. In its 31 years of services, this submarine has led many patrolling missions and has been a loyal guardian of the Indian seas. Now, it rests on the RK beach, as a piece of the country’s history that we can all proudly cherish. Close to 90 meters in length, this submarine is one of the first ones that the Indian Navy had acquired and was an active participant in the 1971 War with Pakistan. It also represented the nation on many naval exercises and goodwill visits around the globe. Retired naval personnel guide tourists through the submarine with various parts like radar room and sonar room on display. Visitors also get an idea of the hardships sailors had to go through at sea. INS Kursura is a tribute to the brave sailors who diligently protected our nation and a testament to the Indian Navy’s glory.

INS Kalvari (S23) :
At a few meters distance from the Kursura Museum lies the fin of a submarine from the same class as Kursura. It was the first submarine to be bought by Indian Navy, back in December 1967. This meant that when it was decommissioned in 1996, the whole submarine was in no condition to be preserved, but the fin still stands at Beach Road near The Park hotel. The propeller of the submarine symbolizes its glorious past and how it was one of the main contributors in the 1971 victory over Pakistan. The Andhra Pradesh government set it up there as a reminder of the sacrifices and struggles the Navy had to make to protect our coast.

Visakha Museum:
What was earlier a Dutch Bungalow is now a museum containing treasures and artifacts of Kalingandhra region. Not only that, it holds armory, coins, and manuscripts from the British era. One can find portraits of members of the Vizianagaram Royal family and photographs of Mahatma Gandhi’s visit to Visakhapatnam. It also contains models of various warships, submarines, and planes. As a piece of history from when the Japanese attacked Visakhapatnam, the Visakha Museum has a shell of a 250-lb unexploded bomb which was dropped in this city. A walk through this historical collection can tell you a lot about Visakhapatnam’s history as well as Indian history.

TU-142 Aircraft Museum:
The latest addition to Visakhapatnam’s collection, this museum is a Soviet-made Tupolev TU-142 aircraft which served 29 years with the Indian Navy. It has close to 30,000 hours of flying time and is the world’s heaviest, fastest flying turboprop aircraft. It was an expert in anti-submarine and surveillance operations for it could detect the lowest of noises. It could fly 16 hours in the skies at a stretch, due to which it was regularly used in patrolling missions. It served in Operation Cactus at the Maldives, Operation Vijay, and Parakram. It signifies the heights that the Indian Navy has reached. 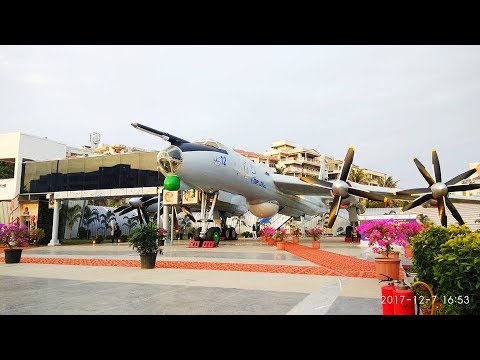 Victory at Sea War Memorial:
The Victory at Sea Memorial is another one of the proud historical places in Visakhapatnam. This memorial was constructed in 1996 as a tribute to the Indian Navy and the sailors in Eastern Naval Command. It is a reminder of our first victory over Pakistan in the 1971 War when the PNS Ghazi was sunk by the Indian Navy and hence, its plans to destroy INS Vikrant. It is a message to all those who plan to hurt India that India will always be brave and proud. 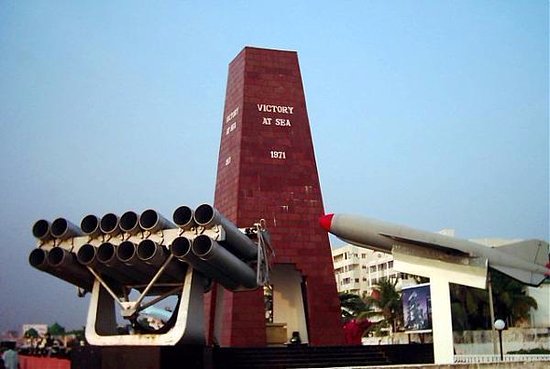